Ted Dekker is a true master of thrillers, and this is his best. There's lots of good Christian fiction around but it's virtually impossible to get non-Christians to read it because it's overtly Christian. This book isn't. The story is gripping. It weaves together the abduction of two young children, the unfolding drama of 'Eve' a serial killer who leaves no clues as he kills a young woman every month, and the tensions between Clark, his ex-wife and an attractive female detective.

Be prepared for a terrifying climax. Mammoth twists and head-pounding turns that will have readers and book clubs debating the roles of emotion and logic that drive human existence It doesn't just get under your skin. It crawls there, nests, and raises its head with a bitter tug, as if it's living within you. ARKs anbefalinger. Det finnes ingen vurderinger av dette produktet. Vis forrige. God does play a redemptive role in this story but readers who have never read a Dekker novel could not infer that this author is known for strictly Christian Fiction.

I loved the story, the pace, and the action and yes the horrible actions of the Boneman due to the writers ease of portraying the emotion of each character. The development of each was fantastic. You felt what they felt and feared what they feared. I encourage anyone interested in a dark story with a lot of Light at the end to rush and pick this one up. Ryan Evans has served his country well as an intelligence officer for the navy. 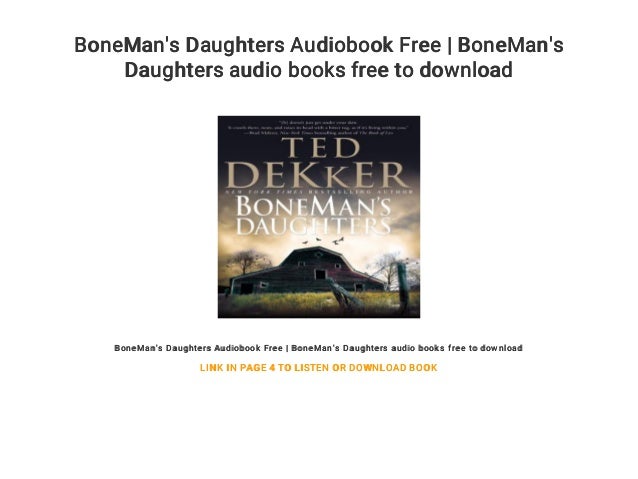 On the other hand his role as a husband and a father has been lacking at best. When a mission goes wrong near Fallujah, Ryan comes face to face with a horrific reality causing him to reflect on his own personal failures. After a narrow escape Ryan vows to return home a better man for his wife and his daughter, Bethany.

Meanwhile in Austin, TX, new evidence has come to light regarding the capture of the serial killer known as Boneman. Two years ago Boneman went on a rampage capturing young girls and then torturing them by breaking all of their bones without breaking their skin. Boneman was finally captured, but the new evidence suggests they have the wrong man. Their suspicions are confirmed when the real Boneman captures Bethany Evans soon after her father returns from Iraq. Ryan will now stop at nothing to save his daughter from this monster.

Unfortunately for Ryan, the FBI is convinced of something else. This was the first Ted Dekker book I ever read. The story is suspenseful all the way through. A new kind of villain and a determined dad.

Excellent thriller with twists and turns. Love the style in which this book is written! Making a complete storyline with every character every chapter that ties into the overall plot. Will definately recommend this book!

I have never read any Ted Dekker books before but one of my roommates loves his novels which explains her dark scary side. I really enjoyed this book for multiple reasons. I really enjoyed the slow beginning. Dekker spent the time to flush out the change in Ryan Evans. I loved reading about his time in the desert and the reason behind his sudden change in perspective on his fatherhood. I also liked reading the background and getting to know the other characters; Bethanny, Celine, Welsh, etc.

Boneman doesn't show up until the middle of the book but it was well worth the wait. I really loved that there were chapters in his perspective so you could really get into the nitty gritty details of how his brain worked. It was all more fascinating than creepy for me. I really loved the detail to the bone breaking as well in a scientific sense and even looked up a few bones to better visualize what was going on.

The last hundred pages were intense and I loved every bit of it. While there was a lot of talk about God and Satan, it fit well into the novel, and wasn't overpowering but rather added to the entire feeling of the book. I really enjoyed it and if you're looking for a fascinating and a creepily deep thriller to read I would suggest this one in a heartbeat. Creepy cover eh? And an equally terrifying story. Ryan Evans is a Naval Intelligence officer dedicated to career and country.

He has spent numerous years away from his wife Celine and his daughter Bethany. When he returns to the US he is determined to repair his relationships with his family. But when he arrives he finds they no longer want him in their lives. His place as husband and father has been usurped by the local District Attorney Burt Welsh. Welsh attained his position by successfully prosecuting the serial killer nicknamed BoneMan.

BoneMan kidnaps young girls, looking for a daughter. When they don't fit what he is looking for - he kills them by breaking every bone in their body. But then BoneMan is released on a technicality and resumes the search for a new daughter - and he picks Bethany. What follows is Ryan's search to rescue his daughter and become the father he wants to be. But the authorities believe that Ryan himself is the killer. On one level this is simply a story of a father fighting for his daughter's love and life. And on that level, it's a heck of a good tale, keeping me turning pages late into the night.

It's a well written, suspenseful thriller, with a great twist at the end. But in a bigger sense, BoneMan is a battle between good and evil. It is also a story of needing to be wanted, needing the love of a parent. For even though the BoneMan is disturbing, despicable and horrendous in his actions, the impetus for his actions is the desire to be loved. I think every reader will take away something different from this book - a gripping read or perhaps a bit more - a look at some deeper values, second chances and some interesting ethical questions. Gotta tell you though, Noxzema will have different associations for me from here forward!